Rhetorical Reversal and Usurpation: Isaiah 10:5-34 and the Use of Neo-Assyrian Royal Idiom in the Construction of an Anti-Assyrian Theology.

by Journal of Biblical Literature
0 of 0 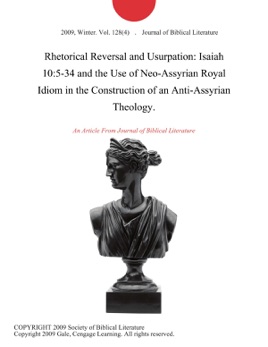 For Mark Throntveit, mentor and friend The self-aggrandizing speeches of an unnamed Neo-Assyrian monarch in Isa 10:5-34 (10:8-11, 13-14) have long piqued the curiosity of both biblical scholars and their colleagues working in Assyriology. (1) Questions concerning the speeches' historical referentiality, redaction, and reuse in other portions of Isaiah (e.g., the [TEXT NOT REPRODUCIBLE IN ASCII] of chs. 36-37) have justifiably been accorded a great deal of attention. For example, Peter Machinist has offered a penetrating comparative study, exploring the question: "How did that empire [Neo-Assyrian] appear to its contemporaries from their sources?" (2) He concludes that several texts in First Isaiah, including some verses from the chapter examined here (10:6, 13), do seem to make reference to Assyrian propagandistic idiom and probably provide the historian with "an important witness to the official Assyrian perspective." (3) More recently, William R. Gallagher, in his thoughtful study of Sennacherib's campaign against Judah, has proposed that 10:13-14 is a summary of Assyrian "ideology and propaganda." (4) Additionally, scholars have drawn attention to the deeply polemical nature of these speeches, noting that they are intentionally designed to caricature negatively and misrepresent the Assyrian king, depicting him as a target worthy of divine judgment. (5)

Journal of Biblical Literature
A Greek-English Lexicon of the New Testament and Other Early Christian Literature.
1.5 of 6

Journal of Biblical Literature
Sethian Gnosticism and the Platonic Tradition.

Journal of Biblical Literature
How Accurate Are Eyewitnesses? Bauckham and the Eyewitnesses in the Light of Psychological Research (Richard Bauckham) (Critical Essay)