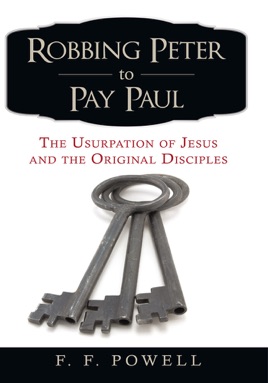 Robbing Peter to Pay Paul looks at how Jesus' teachings were supplanted by St. Paul's doctrines. Jesus is presented to the reader of the New Testament with two different personalities. He is first described as a Jewish Rabbi recognized by His followers as the promised Hebrew Messiah. His second personality, stripped of its Jewish-ness, is somewhat like that of a Greco-Roman god.

His Disciples were Hebrew in the first instance and in the second, they were mostly Greco-Roman. Saint Paul authored most of the Greco-Roman tenets in the New Testament, of course. He became a citizen of Rome as Saul of Tarsus, but is now known as Saint Paul. For centuries theologians seem to have preferred Paul's doctrines to the teachings of Jesus and have shaped a message over the years that our faith must be placed in Jesus' death, not in His life.

As Christianity took shape, Paul battled to get his Greco-Roman dogma accepted. Those persons supporting Paul soon developed a strategy to accomplish that feat. Belittling the Disciples was one approach to the problem, it appears. This is especially true of Peter in some of Paul's Galatians passages.