Saying What the Law should be: Judicial Usurpation in Al-Marri V. Wright. 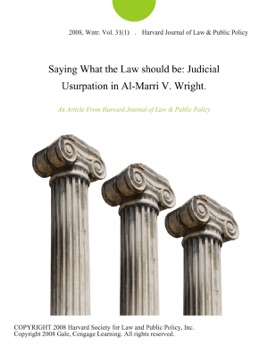 Al-Marri v. Wright (1) is the most recent case in the struggle to define who qualifies as an enemy combatant in the Global War on Terror. In Al-Marri, the Fourth Circuit, in contrast with its previous ruling in Padilla v. Hanft, (2) found that the President's authority to designate a person detained on U.S. soil an enemy combatant was greatly limited. In so doing, the court inappropriately usurped legislative and executive powers. Ali Saleh Kahlah al-Marri, a graduate student, was lawfully residing in Illinois when the FBI arrested him in December of 2001. (3) After criminal proceedings against al-Marri stalled, President Bush declared al-Marri an enemy combatant and ordered him transferred to the custody of the Secretary of Defense. (4) Since June 23, 2003, the military has held al-Marri as an enemy combatant at the Naval Consolidated Brig in South Carolina. (5)

Harvard Journal of Law & Public Policy
The Antitrust Paradox: A Policy at War with Itself (Book Review)

Harvard Journal of Law & Public Policy
The Rise of the Conservative Legal Movement: The Battle for Control of the Law (Book Review)